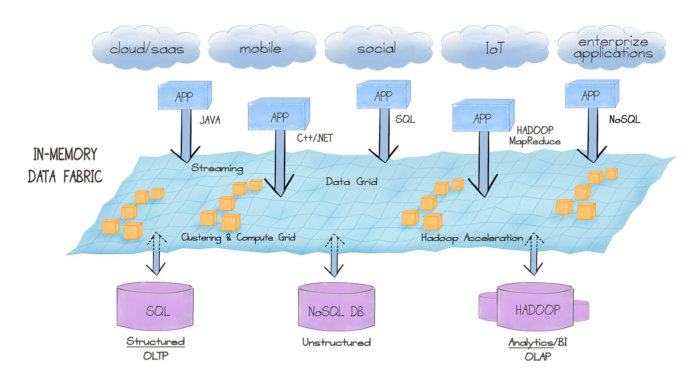 Apache Ignite is an in-memory computing platform that can be inserted seamlessly between a user’s application layer and data layer. Apache Ignite loads data from the existing disk-based storage layer into RAM, improving performance by as much as six orders of magnitude (1 million-fold).

The in-memory data capacity can be easily scaled to handle petabytes of data simply by adding more nodes to the cluster. Further, both ACID transactions and SQL queries are supported. Ignite delivers performance, scale, and comprehensive capabilities far above and beyond what traditional in-memory databases, in-memory data grids, and other in-memory-based point solutions can offer by themselves.

Apache Ignite does not require users to rip and replace their existing databases. It works with RDBMS, NoSQL, and Hadoop data stores. Apache Ignite enables high-performance transactions, real-time streaming, and fast analytics in a single, comprehensive data access and processing layer. It uses a distributed, massively parallel architecture on affordable, commodity hardware to power existing or new applications. Apache Ignite can run on premises, on cloud platforms such as AWS and Microsoft Azure, or in a hybrid environment. Ververica (VERVERICA.COM) have a platform that enables every enterprise to take advantage and derive immediate insight from its data in real time. Powered by Apache Flink’s robust streaming runtime, Ververica’s Platform makes this possible by providing an integrated solution for stateful stream processing and streaming analytics at scale.

Users can keep their existing RDBMS in place and deploy Apache Ignite as a layer between it and the application layer. Apache Ignite automatically integrates with Oracle, MySQL, Postgres, DB2, Microsoft SQL Server, and other RDBMSes. The system automatically generates the application domain model based on the schema definition of the underlying database, then loads the data. In-memory databases typically provide only a SQL interface, whereas Ignite supports a wider group of access and processing paradigms in addition to ANSI SQL. Apache Ignite supports key/value stores, SQL access, MapReduce, HPC/MPP processing, streaming/CEP processing, clustering, and Hadoop acceleration in a single integrated in-memory computing platform.

GridGain Systems donated the original code for Apache Ignite to the Apache Software Foundation in the second half of 2014. Apache Ignite was rapidly promoted from an incubating project to a top-level Apache project in 2015. In the second quarter of 2016, Apache Ignite was downloaded nearly 200,000 times. It is used by organizations around the world.

Apache Ignite is JVM-based distributed middleware based on a homogeneous cluster topology implementation that does not require separate server and client nodes. All nodes in an Ignite cluster are equal, and they can play any logical role per runtime application requirement.

A service provider interface (SPI) design is at the core of Apache Ignite. The SPI-based design makes every internal component of Ignite fully customizable and pluggable. This enables tremendous configurability of the system, with adaptability to any existing or future server infrastructure.

Apache Ignite also provides direct support for parallelization of distributed computations based on fork-join, MapReduce, or MPP-style processing. Ignite uses distributed parallel computations extensively, and they are fully exposed at the API level for user-defined functionality.

In-memory service grid. The Apache Ignite service grid provides complete control over services deployed on the cluster. Users can control how many service instances should be deployed on each cluster node, ensuring proper deployment and fault tolerance. The service grid guarantees continuous availability of all deployed services in case of node failures. It also supports automatic deployment of multiple instances of a service, of a service as a singleton, and of services on node startup.