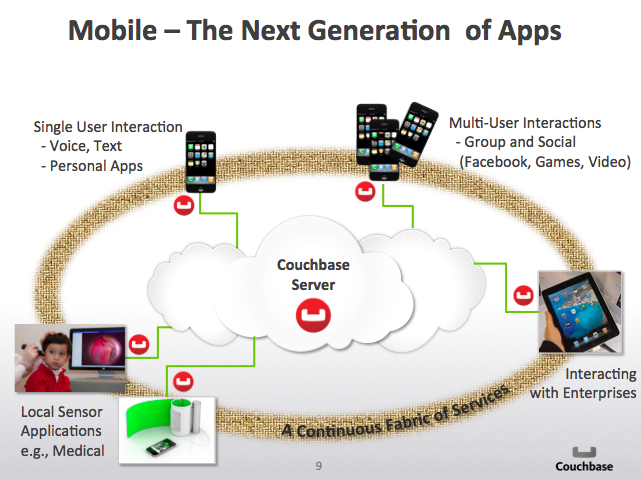 NoSQL startup Couchbase is trying to stake its claim as the go-to database for mobile apps with a new product designed specifically for iOS and Android devices. Called Couchbase Lite, it’s built to run directly on a phone or tablet rather than in the cloud, where the databases powering most mobile applications currently run.

The benefits of running a local database are clear to anyone who has ever lost their work due to a lost connection or had to endure excruciatingly slow load times because of a weak connection. Assuming it’s lightweight and fast — as Couchcase claims its Lite version is — apps can serve and update certain data right from the device a lot faster and more reliably. In the case of Couchbase Lite, applications can sync local data with a cloud-based Couchbase Server database, which means that both instances can remain as up-to-date as their connection status and programming decisions allow.

And we’re not just talking about relatively simple apps like Instagram or Angry Birds. Couchbase SVP of Product Development Rahim Yaseen is excited about the possibilities when you combine powerful multicore processors and increasingly large local memory capacity in mobile devices with a local database. During a call discussing the new database, he suggested the possibilities of e-learning platforms where content and interactions are all stored locally first, and even properly equipped tablets perform advanced medical tasks such as ultrasounds.

“[This much compute and memory] naturally opens the door for applications that are very data-intensive locally,” he said, “including sensor-type stuff.”

Yaseen’s team has already put the syncing capabilities to work in the form of a sample app that’s essentially a crowdsourced game of checkers. Each user on a team suggests the next move, and the results are sent back to a cloud database that feeds the computer that makes the ultimate decision. Theoretically, he noted, a chess club distributed around the world could use a similar type of app to take on a grandmaster. By Derrick Harris read more