Enterprises may still not know exactly what value they expect to glean from Big Data, but that hasn’t stopped them from spending big money on Big Data skills like Hadoop and NoSQL. According to a 2013 Dice Tech Salary Survey, Hadoop and NoSQL skills, the two mainstays of Big Data projects, are worth more than any other technology skills, up to $115,062 on average, with Apple-related technologies like Omnigraffle and Objective-C not far behind.

Buried in that salary data, however, are indicators that Big Data remains far too much of a Silicon Valley science project for now.

The Big Money Is In Data

As I noted recently, enterprises are somewhat conflicted on how to make use of Big Data. When 56% of respondents struggle to know how to get value from their data yet are either deploying or planning to imminently deploy a Big Data project, we have a serious disconnect.

What we don’t have, however, is any sort of hiring freeze on Big Data professionals, as the salary data suggests: 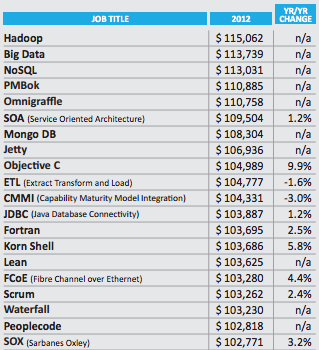 Enterprises are clearly willing to pay a premium to find or retain good people to help make sense of their data.

They’re also paying a premium for Apple-savvy developers. Both Omnigraffle and Objective-C show up in the top-10 highest paying job skills in Dice’s survey. This is even more interesting in light of Indeed.com’s analysis of the hottest job trends. In addition to two Big Data technologies making the list, five mobile skills (HTML5, iOS, Android, mobile app, jQuery) find themselves in the top-10, only one of which is explicitly Apple-related.  Read more